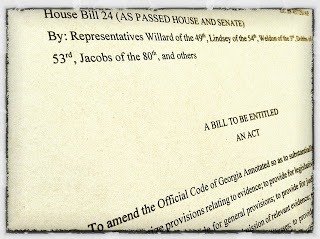 On January 1, 2013, Georgia's new evidence code will go into effect, bringing with it one of the most significant changes to Georgia court in history. Representing the first wholesale revision of the Code since 1863, the new Georgia evidence provisions, located in Title 24 of the Official Code of Georgia, Annotated, in large part adopt the Federal Rules of Evidence, which have governed federal litigation since 1975.

Georgia Law of Torts - Trial Preparation and Practice (published by West, a Thomson Reuters business), co-authored by partner John Hadden along with Kenneth Shigley, contains a comprehensive overview of the new evidence code, including a complete cross-reference table of the old and new codes as well as a table detailing the substantial changes ushered in by the new rules. Among the substantial changes to the rules are an expansion of the hearsay doctrine, including admissibility of opinion testimony contained in business records; the ability for attorneys to unilaterally issue subpoenas; expansion of the use of habit and routine evidence; application of journalist privilege to electronic media; and changes to the law governing the use of prior inconsistent statements in court.

The new code was passed during the 2011 Georgia General Assembly and the text of the bill (House Bill 24) can be located on the General Assembly's web site: TEXT OF HB 24