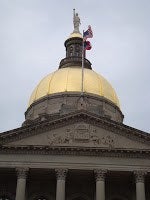 The Georgia General Assembly has passed, and Governor Nathan Deal has signed, a bill intended to prevent government fraud and taxpayer waste arising from abuse of government programs. The bill applies broadly to state government and agencies, Medicaid (a joint state and federal program), and local governments. It provides for substantial penalties for those taking action to defraud the government, including repayment of the amounts defrauded, and allows so-called "whistleblowers," or those who report government fraud, to be compensated with a portion of the recovered funds.

The federal government has a similar rule, known as the "False Claims Act" (located in the US Code at 31 U.S.C. §§ 3729–3733) that provides substantial penalties for those abusing federal programs for monetary gain. Like the Georgia law, the Federal FCA allows whistleblowers to recover potentially substantial amounts for turning in those involved in defrauding the government.