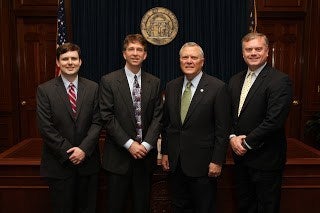 On Wednesday, John Hadden, along with Georgia Trial Lawyers Association president Michael Warshauer and GTLA grassroots director Micah Gravley, met with newly elected Georgia governor Nathan Deal at the capitol.  Governor deal asked for our input on a bill overhauling the Georgia evidence code that is currently being debated by the general assembly.  Later in the day, we met with legislators and attended the Senate Judiciary Committee hearing.