(Note: This is the first of two blog posts dealing with personal injury claims that can occur during snowy and icy conditions. This piece concerns auto accidents, while an upcoming post will discuss cases involving falls.) 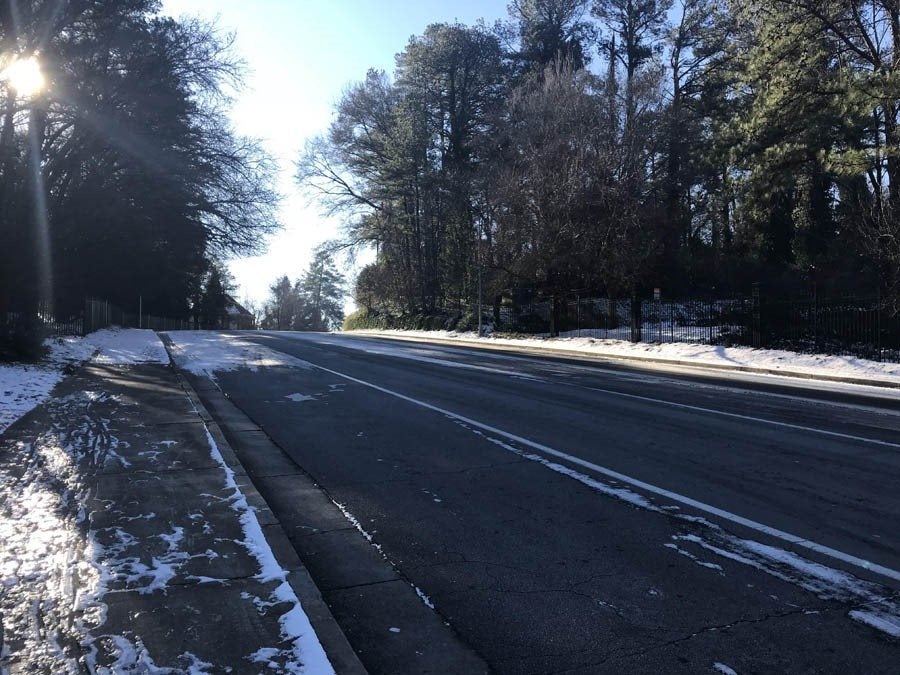 Today, much of Georgia, including its roads and highways, is covered in snow and ice, and numerous schools, businesses, and government agencies are closed. Nevertheless, and despite the advice of public officials to stay off of the roads, many drivers will attempt to navigate the snowy and icy highways and roads of the state, sometimes due to emergencies. And unfortunately, as have already been reported in Georgia, many car accidents will result, some of which may cause personal injuries. The DeKalb County 911 system, for example, recorded 257 calls regarding car accidents by around 6:00 pm, and Gwinnett County officials reported working 69 wrecks before 10:00 am.

If an auto accident occurs when there is ice on the roads, who is responsible? Every driver has a duty to exercise due care when operating a motor vehicle, and that duty does not change when the roads and highways are dangerous due to snow and ice. In fact, it could be said that drivers have a heightened duty due to knowledge of the hazardous condition. Certain duties are set out in Georgia's Uniform Rules of the Road contained in chapter 40 of the Official Code of Georgia (O.C.G.A.). For example, the following sections address certain duties of drivers, and violation can, in some cases, constitute an admission of negligence:

These are just a few of the provisions that all drivers must follow (with a few exceptions for emergency vehicles, in certain situations), including in snow and ice on Georgia highways and roads.

Commercial vehicles, including tractor trailers, are given additional guidance during hazardous conditions. For example, the Georgia Commercial Drivers Manual state, at section 2.6.2, that

It will take longer to stop, and it will be harder to turn without skidding, when the road is slippery. Wet roads can double stopping distance. You must drive slower to be able to stop in the same distance as on a dry road. Reduce speed by about one-third (e.g., slow from 55 to about 35 mph) on a wet road. On packed snow, reduce speed by a half, or more. If the surface is icy, reduce speed to a crawl and stop driving as soon as you can safely do so.

Thus, the Commercial Drivers Manual recommends that commercial drivers reduce speed by half when snow is present, and that they slow as much as possible and stop whenever possible when ice is present on the highway.

Notwithstanding these statutory rules, a claim against a person who causes a wreck during snow and ice presents difficulties that may not be present in other types of cases. For example, the at-fault driver's insurance company may claim that the auto accident was caused by an “act of God,” and in fact many insurers commonly raise such a defense. But an “act of God,” while a valid defense under Georgia law, is strictly defined under the law. As stated in O.C.G.A. § 1-3-3(c), an act of God is

an accident produced by physical causes which are irresistible or inevitable, such as lightning, storms, perils of the sea, earthquakes, inundations, sudden death, or illness. This expression excludes all idea of human agency.

In order to prove the act of God defense in a personal injury claim, a person (usually an attorney hired by an insurance company) must show not only that the condition was caused by a natural event, but that the reason for the injury “excludes all idea of human agency.” In other words, the snowy highway accident, for example, must not have been in any way the fault of a driver. This is rarely the case. At a minimum, a driver can usually see patches of ice on the highway, and could have either avoided it, or driven slower, or not have driven at all. Additionally, the driver may have operated a vehicle without appropriate snow or ice equipment, or may have driven with tires without sufficient tread for the conditions. Thus, it is a rare case where the purportedly at-fault driver played no role whatsoever in the accident, which would be required for the defense to succeed under Georgia law. Nevertheless, it is often raised, and jurors, at trial, may view a wreck on an icy roadway as simply inevitable and reduce the defendant's liability, or find no liability at all. The law governing this area can be complex, however.

An additional defense may be raised regarding assumption of risk or contributory negligence. In Georgia, an injured person is considered to have assumed the risk of an injury if he or she had knowledge of the specific danger that might occur from an act (such as getting in the car with a driver on a snowy or icy day) and nevertheless voluntarily undertakes that act. If the defendant can prove that this was the case, the injured party cannot recover. This is difficult to show, however, and it is usually up to a jury to determine whether the plaintiff assumed the risk. Similarly, the concept of contributory negligence may reduce the amount of fault on the part of the defendant if a jury finds that the injured person contributed in some way to their injury. Generally, this means that the plaintiff undertook some act that caused, to some extent, the injury, but did not willfully do so (as in the case of assumption of risk). If the jury finds that the injured party is at least 50% responsible for his or her injuries, however, the defendant is not liable.

Personal injury claims arising out of car accidents that occur during hazardous conditions such as snow and ice are likely to present complications not present in a claims that happen on a clear, dry day. Insurers will often make every argument possible in order to avoid paying a claim. Thorough knowledge of Georgia law, including principles of contributory negligence, assumption of risk, the act of God defense, and commercial/tractor trailer rules, regulations, and guidelines, can be critical to making a successful claim involving snow or ice.