Why Georgia drivers should have uninsured motorist coverage

We often hear from clients who have been involved in automobile wrecks that they have "full insurance coverage" on their automobiles. Unfortunately, very often what they thought was full coverage is actually minimal coverage that provides only personal injury and property liability coverage that pays for damages to othersinvolved in a wreck. It often excludes one of the most important types of automobile insurance, uninsured motorist coverage, sometimes referred to as "UM" or underinsured motorist coverage. (Click here to view our firm's information page on automobile insurance). 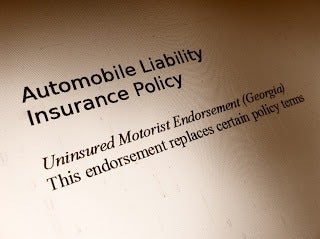 Uninsured motorist coverage is a unique form of insurance available to protect you from the very real risk of injury caused by a driver who has either no insurance or insurance that is insufficient to fully compensate you (or your passengers) for your injuries. In other words, it protects you against not only the negligence of another driver for his unsafe driving, but also against his failure to obtain insurance. Thousands of vehicles are operated on the road without proper liability insurance. According to several sources, approximately 15% of drivers in Georgia may be uninsured. While this is illegal, and a driver caught driving while uninsured faces serious penalties, these penalties do little to compensate a person injured by the uninsured driver. Moreover, a very high percentage of drivers carry only the statutory minimum $25,000 in liability insurance coverage, which is often grossly insufficient to cover the damages resulting from an auto wreck. This is why UM coverage is so important.

For example, if you are involved in an automobile accident where another driver is at fault (let's call him Sam), and you sustain $50,000 in medical bills, you are legally entitled to payment for your medical expenses as well as other damages, such as lost wages or pain and suffering. But if Sam is uninsured it may be nearly impossible to receive any payment for your injuries, despite Sam's legal liability to you. In other words, Sam may be judgment proof. Similarly, if Sam has only $25,000 in insurance coverage, which is the minimum required by the state of Georgia, it is very likely that Sam's insurance company will settle for the $25,000, but you may have no other way to receive payment for the rest of your damages and might be forced to pay the remainder of your own medical bills.

Uninsured motorist coverage protects you in these situations by providing additional insurance coverage for your damages. In the example, if Sam had no insurance, but you had purchased $50,000 in uninsured coverage through your own provider, you could receive an additional $50,000 in insurance benefits to cover your loss, including medical bills and lost wages as well as pain and suffering. The specific amount of benefits you could receive would depend on the type of of uninsured motorist coverage purchased. The usual (and, by law, default) type provides the full amount of UM coverage purchased on top of the at-fault driver's liability coverage. So, if an at-fault driver has $25,000 in insurance, an injured person with $50,000 in UM coverage would be entitled to up to $75,000 in total coverage (Sam's $25,000 in liability coverage plus your own $50,000 uninsured motorist coverage) if the damages were extensive.

The other type of uninsured motorist coverage, often called "offset" (or "setoff") UM coverage applies only to the extent the UM insurance purchased exceeds the at-fault driver's liability coverage. Thus, in the example, this type of coverage would provide only an additional $25,000 in possible insurance payments, since the $50,000 in UM coverage would be reduced by $25,000 as a result of the at-fault driver's own $25,000 in coverage. This "offset" coverage was the standard form of UM coverage in Georgia prior to an amendment to the Georgia Uninsured Motorist Act (Official Code of Georgia, Annotated, or O.C.G.A.) section 33-7-11 that went into effect on January 1, 2009.

The information contained in this article is applicable to Georgia automobiles and wrecks only, and nothing contained in this article should be considered legal advice. However, our firm has handled many claims involving automobile wrecks, including uninsured motorist claims, and we will be glad to meet with you if you have been involved in a wreck due to the negligence of another driver. Our attorneys have years of experience representing both insurance companies and injured people in hundreds of cases.